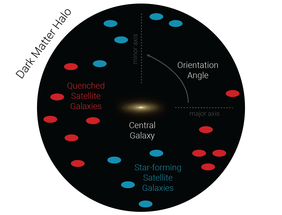 The figure shows the relative density of halo gas around a central galaxy affected by a collimated, bipolar outflow of a supermassive black hole from a central galaxy. The energy input from the central black hole produces a large-scale, directional outflow that reaches more than 2500 km/s. This flow heats the gas to temperatures of one hundred million degrees Kelvin and ruptures gas zones in a shell-like fashion. The thinned medium allows satellite galaxies to move with less ram pressure, which sustains their star-forming activity. (Source: TNG Collaboration/Dylan Nelson)

The evolution of satellite galaxies is shaped by their constant interaction with the so-called circumgalactic medium surrounding their central galaxies. This medium in turn is influenced by the central supermassive black hole, which is often located in the cores of such central galaxies. By analyzing the properties of more than a hundred thousand satellite galaxies and their position relative to the central galaxy, an international team of researchers including Dr. Dylan Nelson of the Center for Astronomy at the University of Heidelberg (ZAH) has now been able to show that the closer satellites are to the axis around which the galaxy primarily revolves and along which the black hole preferentially ejects gas and energy, the more frequently they exhibit star-forming activity. Their observation fits precisely with the nature of black hole interaction with massive galaxy halos, since outflows driven by active galactic nuclei with their black hole effectively cleanse the circumgalactic medium, reducing the ram pressure on satellites as they pass through the halo, and their star-forming activity is not thereby attenuated. This interpretation is supported by elaborate numerical simulations called IllustrisTNG, whose evaluation yields very similar results. The researchers' results have now been published in the scientific journal NATURE.

Next to stars and galaxies, black holes are probably the best-known astronomical objects. In fact, they are a holy grail of astrophysics. Just last year in 2020, the German Astrophysicist Prof. Reinhard Genzel was awarded the Nobel Prize for his work on the study of the black hole in our home galaxy.

Black holes have now turned out to be the architects of the universe in many ways. They unfold their action and their influence on small, but also on very large scales on which they influence the development of whole galaxies with millions of stars, in whose center they are often found. That their influence extends far beyond a single galaxy has now been demonstrated by an international team of researchers led by Ignacio Martín-Navarro of the Instituto de Astrofísica de Canarias, Instituto de Astrofísica de Canarias and the Universidad de La Laguna. The data for the study was provided by the so-called "Sloan Digital Sky Survey (SDSS)," which after years of intensive observation of the sky was able to provide, among other things, a catalog of images and spectroscopic data on millions of galaxies.

Martín-Navarro and his colleagues are using the wealth of data from the SDSS to identify so-called satellite galaxies. These are smaller galaxies that orbit their respective much larger central galaxy, much like planets orbit the Sun. For each of these satellites, they first determined how actively new stars were being formed within them, as well as the total mass of their respective stellar populations. The decisive factor was the analysis of the distance between the satellite galaxies and their respective central galaxies and, above all, the angle between them and their central axis, the so-called minor semiaxis.  For it is mainly along this axis that the influence of the black hole in the center should unfold.

The result of the extremely complex analysis for a sample of 124,165 satellite galaxies and 29,631 central galaxies was fascinating: clearly most frequently actively star-forming satellite galaxies were located in regions above and below the assumed disk of a galaxy into which the black hole emits the most energy. On the other hand, they were found least often in the direction of the disk plane.

This finding is even more pronounced the more massive the central galaxy and the central black hole, and the shorter the distance of a satellite from the center.

"We looked at the result from the point of view of two different mechanisms that could lead to such a phenomenon" explains Dr. Dylan Nelson, who leads an Emmy-Noether research group at the Institute for Theoretical Astrophysics of the Center for Astronomy. "On the one hand, a difference in the formation location of satellite galaxies could be responsible, for example if the satellite interacted with the ‘cosmic web’ of large scale structure prior to entering the halo itself, and this affected its star formation. On the other hand, it may be an effect of the central supermassive black hole releasing gas and energy into the halo of a large galaxy through which the satellites move, primarily just along the central axis."

To distinguish between the two scenarios, the authors used a comprehensive cosmological simulation called IllustrisTNG, in comparison to an older simulation called Illustris. The difference consisted in the fact that in the second version the effects of central black holes were modeled in a more physically accurate way. And indeed, only in this case the simulated satellite galaxies also show the behavior measured in reality.

The cause was found fast. Because the gas and energy outbursts of black holes along the central axis lead to the fact that the circumgalactic medium, by which the satellite galaxies move with several hundred kilometers per second, is driven away and thinned out. As a result, they feel, as it were, a lower updraft that would otherwise simply sweep away the gas from which they form their new stars. So this explains why they found the more active of the satellite galaxies mainly above and below the galaxy disks.

This research result is a wonderful example of how extensive data from previous sky observations, such as the Sloan Digital Sky Survey, and computer simulations can be used to gain new insights into the evolution of galaxies.