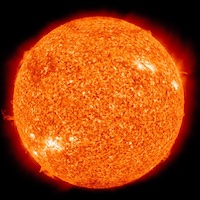 Image of the sun, taken by NASA's Solar Dynamics Observatory. Light that leaves the surface of the sun on its way to Earth experiences a loss of energy in its strong gravitational field, which leads to the so-called gravitational redshift. The effect is very small and is about two parts in a million. Nevertheless, it could now be measured precisely. (Image source: NASA/SDO (AIA), Wikimedia Commons)

Albert Einstein described gravity as a result of the curvature of so-called space-time. But the best physical theory is useless if it cannot be tested experimentally. And indeed, Einstein's theory could score again and again, and every prediction could be confirmed with the utmost precision, e.g. in the bending of the trajectory of light rays passing the gravitational field of the sun or, more recently and spectacularly in the detection of gravitational waves.

Another test is now being led by a team of astrophysicists led by Jonay I. Gonzalez Hernandez  of the  Instituto  de  Astrofísica  de Canarias (IAC). The theory of relativity predicts exactly how much energy the light of the sun should lose from its surface when it has to virtually free itself from the gravitational field of the sun. The goal of the team around Dr. González Hernández was to measure this so-called gravitational redshift in the light of the sun and to compare it with the theoretically predicted value. The goal was ambitious, because the effect is very small, about two parts in a million!

This prediction is relatively simple: the energy loss of light can be expressed as an alteration of the frequency that the electromagnetic radiation of the light experiences after leaving the sun's surface in its gravitational field. One can also compare this with changes in the reception frequency of one’s favorite radio station: if one were to receive the broadcast not from a station on earth but hypothetically on the sun, one would have to correct the frequency of the transmitter a bit downwards in order to have an optimal reception again. This frequency change can be converted to a speed at which the sun would have to move away from us in order to achieve the same effect. The exact value is 633 meters per second.

And it was precisely this predicted value that Dr. Herández and his colleagues hoped to find by observing the solar spectrum reflected by the moon with a high-precision spectrograph called HARPS (High Accuracy Radial velocity Planet Searcher) on the 3.6 meter telescope of the European Southern Observatory at Cerro La Silla in Chile.

In principle, they only had to compare the wavelength shift of absorption lines in the solar spectrum caused by the gravitational field of the sun with their undisturbed position. Absorption lines are caused by chemical elements in the outer bubbling plasma layers of the sun, which absorb parts of the light from further inner zones, which leads to the more or less sharp, valley-shaped flaws in the spectrum.

Dr. Hans-Günter Ludwig from the Center for Astronomy at the University of Heidelberg an one of the co-authors of the research paper is an expert on such calculations of stellar spectra based on three-dimensional simulations of their outer layers. "My synthetic absorption lines were used to calculate the influence of the convective blueshift. The blue shift by convection typically makes up 300 m/s in the sun, which is superimposed on the gravitational redshift," explains the astrophysicist. "The calculated synthetic spectra, taking into account all possible effects, even showed that absorption lines of the element iron are shifted to shorter wavelengths by convective movements and additional temperature fluctuations in the solar atmosphere by up to 500 meters per second. This so-called blue shift is thus about the magnitude of the redshift of 633 meters per second caused by gravity".

After their extensive analysis, the scientists determined a value for the gravitational redshift of 638 ± 6 m s-1, which in the context of the measurement error is excellently in line with the theoretically predicted value of 633.1 m s-1. Albert Einstein would certainly have been pleased with the result, but he probably wouldn't have been surprised either.