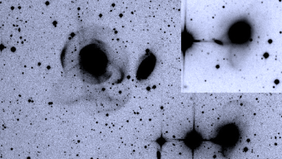 Image of the elliptical galaxy NGC474. 91 million light-years away, this galaxy has a complex of shells and streamers roughly 200,000 light-years across, caused by a collision with a smaller galaxy that has likely occurred with the last 1 billion years. The inset shows a neighbouring galaxy that appears to be in the act of "eating" a smaller flat galaxy. The image is a 1-hour exposure using the 0.7-m telescope described in the study. Image credit: R. Michael Rich

An international team of Astronomers with Andreas Koch (ZAH/ARI) has recently completed the largest survey to date of the faint outskirts of nearby galaxies. This survey of Haloes and Environments of Nearby Galaxies (HERON) finds, amongst others, that the diameters of the galactic outskirts appear to correlate with the brightness and type of galaxy. First results have now been published in a paper in Monthly Notices of the Royal Astronomical Society.

The far outer regions of galaxies, their so called "haloes", contain ancient stars ejected in collisions with other galaxies, as well as stars that were among the first to form in the galaxy’s history. Understanding these regions helps tracing the invisible dark matter structures which seem to be entangled with visible stars and gas that make up the most obvious and generally more concentrated component of a galaxy.

For the survey the team used a dedicated small and low cost 0.7-m telescope based near Frazier Park, California, equipped with a digital camera designed to catch the galaxies faint outskirts.

Andreas Koch, Astronomer at the Center of Astronomy of Heidelberg University (ZAH), is especially interested in the data with respect to so called "dwarf galaxies". These objects like the Large Magellanic Cloud contain only a few hundred million to a billion stars and have a fraction of the mass of the Milky Way. "These new data contain a treasure of information regarding my own field of research regarding dwarf galaxies. They are assumed to be the building blocks of prominent galactic systems like the Milky Way" resumes Dr Koch. He will apply the observations to trace the distribution of mysterious dark matter, the dominating mass component of dwarf galaxies. His goal is to understand the processes by which these gigantic haloes grow, which now have become even more obvious from the ultradeep observations. The HERON team already found that the diameter of a galaxy's halo is correlated with a galaxy's brightness. Galaxies brighter than the Milky Way show the largest haloes, some exceeding 600.000 light-years across. This is significantly larger than the Milky Way and its small-satellite galaxy system. Researchers had also sought a connection between evidence of a galaxy collision and the amount of star formation observed in a galaxy, but this is not confirmed in the new data. Instead, old, red and "dead" galaxies are as likely to have visible collisions as a disc galaxy with a recent burst of star formation. Collisions are mostly found to have occurred in any galaxy more luminous than the Milky Way.

The team will place all of its science images into the NASA/IPAC Infrared Science Community Archive, including new observations of additional galaxies not discussed in the paper. In total, it is expected that data for over 150 galaxies will become available to anyone in the world.

Further information
- A copy of the paper is available from:

- Science images from the survey will be placed in the NASA/IPAC Infrared Science Community Archive, and will be live from 1 November 2019 at: