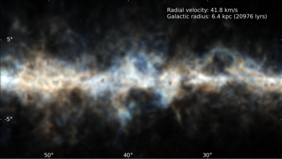 This image shows the bubbly appearing atomic hydrogen emission in the inner Galaxy at about 6.4 kpc (1 kpc = 3 × 10^19 m) distance from the galactic center. Colours indicate the velocity of the gas relative to the sun, with blueish colour highlighting gas moving towards us and reddish colours showing receeding gas. (© J.D. Soler, private communication) 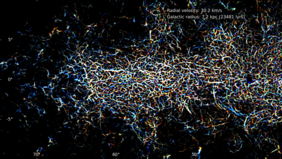 By applying artifical intelligence algorithms to the radio data the scientist were able to reveal the bubbly character of the interstellar medium as shown on this processed image. (© J.D. Soler, private communication)

An international group of astronomers, led by Juan Diego Soler of the Italian National Institute for Astrophysics (INAF), have found the imprint of the bubbles produced by the explosion of dying stars in the structure of the gas that pervades our galaxy. They made this discovery by applying techniques from artificial intelligence to the HI4PI survey data, which provides the most detailed whole-sky distribution of atomic hydrogen in the Milky Way to date. The scientists analyzed the filamentary structure in the emission from atomic hydrogen gas. They inferred that it preserved a record of the dynamic processes induced by ancient supernova explosions and the rotation of the Galaxy.

Hydrogen is the main component of stars like the Sun. However, the process that leads the diffuse clouds of hydrogen gas that spread through our galaxy to assemble into dense clouds from which stars ultimately form is not yet fully understood. A collaboration of astronomers headed by Juan Diego Soler from the INAF-IAPS (Istituto di Astrofisica e Planetologia Spaziali, an INAF research Institute in Rome) and the ECOgal project funded by the European Research Council has now taken an important step in elucidating the life cycle of the raw material to form stars.

Soler processed data from the most detailed whole-sky survey of the emission from atomic hydrogen in radio waves, the HI4PI survey, which is based on observations obtained with the Effelsberg 100-meter Radio Telescope in Germany and the Parkes 64-meter Radio Telescope in Australia. “These archival observations of the hydrogen emission line at 21-cm wavelength contain information on the distribution of the gas in the sky and its velocity in the direction of observation, which combined with a model of the Milky Way rotation indicates how far are the emitting clouds”, indicates Sergio Molinari from the INAF-IAPS, principal investigator of the ECOgal project.

To study the distribution of the Galactic hydrogen clouds, Soler applied a mathematical algorithm commonly used in the automatic inspection and analysis of satellite images and online videos. Because of the size of these observations, it would have been impossible to do this analysis by eye. The algorithm revealed an extensive and intricate network of slender threadlike objects or filaments. Most of the filaments in the inner part of the Milky Way were found to be pointing away from the disk of our galaxy. “These are likely the remnants of multiple supernovae explosions that sweep up the gas and form bubbles that pop when they reach the characteristic scale of the Galactic plane, like the bubbles that reach the surface in a glass of sparkling wine”, comments Ralf Klessen. Klessen also is principal investigator of the ECOgal project, which aims at understanding our Galactic ecosystem from the disk of the Milky Way to the formation sites of stars and planets. “The fact that we see mostly horizontal structures in the outer Milky Way, where there is a strong decrease in the number of massive stars and consequently fewer supernovae, suggests that we are registering the energy and momentum input from stars shaping the gas in our Galaxy”, complements the astronomer based at the Center for Astronomy of Heidelberg University in Germany.

“The interstellar medium, which is the matter and radiation that exist in the space between the stars, is regulated by the formation of stars and supernovae, with the latter being the violent explosions that occur during the last evolutionary stages of stars that are more than ten times more massive than the Sun,” comments Patrick Hennebelle, who along with Klessen coordinates the theoretical work in the ECOgal project. “Associations of supernovae are very efficient at sustaining turbulence and lifting the gas in a stratified disk”, clarifies the researcher at the Department of Astronomy at the CEA/Saclay in France. “The finding of these filamentary structures in the atomic hydrogen is an important step in understanding the process responsible for the galaxy-scale star formation”.