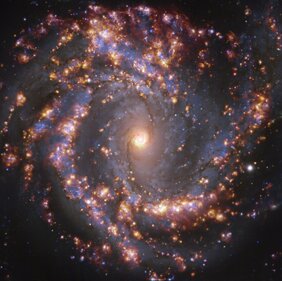 This image was taken by the Multi-Unit Spectroscopic Explorer (MUSE) on ESO’s Very Large Telescope (VLT). It shows the nearby spiral galaxy NGC 4303. The image is an overlay of observations conducted at different wavelengths of light to map stellar populations and warm gas. The golden glows correspond to clouds of ionised hydrogen, oxygen and sulphur gas, which mark the presence of newly born stars. The image was taken as part of the Physics at High Angular resolution in Nearby GalaxieS (PHANGS) project. (Credit: ESO/PHANGS)

There is hardly any other field of research in astrophysics that is so intensively investigated worldwide as the formation of stars. In the world's largest astrophysics literature database ADS alone, one finds more than 85,000 publications when searching for scientific papers on the subject of star formation. This comes as no surprise to experts in the field, since the processes involved in star formation are among the most complex in the universe.

An essential building block for gaining knowledge is still the collection of observational data on star formation, preferably with the most modern and best telescopes the world has to offer. And the more precise and rich the data from these observations are, the better the mystery of star formation can be uncovered.

Based on this approach, a team of about 90 internationally renowned scientists from 30 research institutes on four continents came together in 2016 to get to the bottom of the mystery of star formation. "PHANGS" was born, the acronym for "Physics at High Angular Resolution in Nearby Galaxies."

The goal of PHANGS is to perform high-resolution observations of nearby galaxies with multiple telescopes, including high-tech instruments such as ALMA and VLT operated by the European Southern Observatory and the Hubble Space Telescope (HST), in order to understand the interplay of the small-scale physics of gas and star formation with galactic structure and galaxy evolution. In particular, observations of nearby and thus accessible galaxies in detail should be used to understand how physics at or near the "cloud" scale is affected by conditions on the scale of entire galaxies, but also how it affects processes on even smaller scales and how these in turn affect the evolution of entire galaxies.

A very special trove of data from the PHANGS project, called the PHANGS-MUSE Large Program, has recently been made available to the public. "This Project - related to the wavelength range studied - is indeed one of the most comprehensive, deep, and high-resolution data sets for detailed studies of star formation currently available to us," confirms Dr Kathryn Kreckel, Emmy Noether Research Group Leader at Heidelberg University's Center for Astronomy (ZAH).  Dr Kreckel is the leader of the PHANGS science working group that studies the connection between gas ionization and star formation, and an expert on the buildup of stellar mass through star formation. This evolution is regulated by the baryon cycle, the conversion of gas into stars and the eventual ejection and recycling of this material to form the next generation of stars.

„The new data are to my research like gems in a treasure chest that has just been opened. The images are not just beautiful, but valuable as they provide new insights into the physics of star formation. “ shares Kathryn Kreckel.

The MUSE instrument collects spectra, effectively "bar codes" of astronomical objects that astronomers can scan to reveal the properties and nature of cosmic objects. MUSE does this at every single location within its field of view, providing much richer information than conventional instruments have been able to do. For the PHANGS project, MUSE observed 30,000 gas nebulae and collected about 15 million spectra of different galactic regions. The ALMA observations, on the other hand, allowed astronomers to map about 100,000 regions of cold interstellar gas in nearby galaxies, creating an unprecedentedly sharp atlas of stellar nurseries in the nearby universe. By combining MUSE and ALMA images, astronomers can now compare the galactic regions where star formation occurs with the locations actually expected, and thereby better understand what triggers, promotes, or prevents the birth of new stars.

Regardless of their scientific information content, the resulting images alone are simply breathtakingly beautiful. It almost seems as if fireworks are being lit in galaxies everywhere to celebrate the beauty and fascination of the cosmos. It is no wonder that researchers are now working hard and enthusiastically to study these spectacular glimpses into the nurseries of our neighboring galaxies and to fully unravel the mystery of star formation.

About "MUSE"
MUSE, the "Multi Unit Spectroscopic Explorer" is a so called Integral Field Spectrograph (IFS). An IFS allows to observe the entirety of an astronomical object in one go, and for each pixel measures the intensity of the light as a function of its wavelength. The resulting data is a 3D set where each pixel of the image has a full spectrum of the light. MUSE splits the field of view into 24 individual image segments or channels which are each split further into 48 slices or “mini slits”, giving a total of 1152 mini slits. Each set of 48 mini slits is injected into a spectrograph, which disperses the light into its constituent colors. From this, the 3D image is created.

About "ALMA"
In the Chilean Andes, the European Southern Observatory (ESO), together with its international partners, operates ALMA, the Atacama Large Millimeter/submillimeter Array (ALMA). ALMA is  state-of-the-art telescope to study light from some of the coldest objects in the Universe. This light has wavelengths of around a millimetre, between infrared light and radio waves, and is therefore known as millimetre and submillimetre radiation. ALMA comprises 66 high-precision antennas, spread over distances of up to 16 kilometres. This global collaboration is the largest ground-based astronomical project in existence.

About "HST"
The Hubble Space Telescope (often referred to as HST) is a space telescope that was launched into low Earth orbit in 1990 and remains in operation. It is one of the largest and most versatile, renowned both as a vital research tool and as a public relations boon for astronomy. The Hubble telescope is named after astronomer Edwin Hubble. Hubble features a 2.4 m mirror, and its five main instruments observe in the ultraviolet, visible, and near-infrared regions of the electromagnetic spectrum.